Welcome to Scubamovie. With our reports, photos and videos we document trips to international dive destinations  like Egypt, Thailand, Philippines, Indonesia, Fiji, Cook Islands, NewZealand, French Polynesia (Tahiti and Moorea) and Saudi Arabia. Scuba Diving, filming above and under water, creating underwater videos and photos  about diving, wild life and travel has become more than just a hobby. We use non-linear system to capture and edit our films to finish on various media, preferably on DVD. Therefore we take every opportunity to  visit international waters in order to get new impressions and capture them with our video and photo equipment. 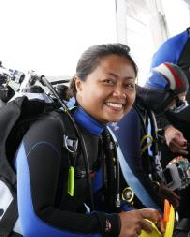 ”Since childhood days I developed a very close relationship to water sports. At the age  of 6 I have learned how to swim.  With 8 I have received my first snorkle equipment and with 10 I was able to dive down to 10 m (30 ft.) without any air supply. However, it took me a long time to start  with my
first level of Scuba Diving in 1996. Meanwhile I extended my certification level of Scuba Diving to PADI DIVE-MASTER”  (Mario)

“On the initiative of Mario I started with Scuba Diving in January 2005. Meanwhile I reached  the certification level of ADVANCED OPEN WATER DIVER and I’m feeling fine even under water as well as on land. Our shared hobbies are part of our private life and we never want to miss them. So I am  looking forward to any opportunity to descent in one of the many tropical waters especially in my native country Thailand” (Chaluay)

After purchasing the first digital video camcorder in 1997 and an underwater housing in 1998 I  extended the hobby. Since then every holiday will be used to enjoy the amazing underwater world to get a lot of recordings with my camcorder. At the end of 1999 I’ve exchanged my video equipment with a 3 CCD  chip digital video camcorder and a semiprofessional housing to increase the quality of my movies. Due to the purchase of a new realtime editing system in December 2002 and further hard- and software extentions the  quality of the nonlinear digital editing system arrived on a high level. (Details at “Equipment”). In addition we join several international video contests of  the genres underwater film, wildlife film, documentary film, travel film and dive film.